“Drama is life with the dull bits cut out.”  ~ Alfred Hitchcock.
‘Drama’ is indeed derived from the Greek word for ‘Action.’  Drama in your story must be like your life, without the boring parts–for example, you are waiting for the bus, which is boring and has no point of tension, so in your work that part must be taken away and not showed at all, unless something of drama extremely conducive to the story is added.  Then, of course, the essence of drama is crisis; however, there is two kinds of crisis, “the hero crisis,” and “the natural crisis.”  The hero crisis is, for example, in “Mission Impossible” or “Batman,” where the hero has great abilities, sometimes fantastical and superhuman, something that you do not experience every day in your own life. The natural crisis, for example, in “Office space” or “Manchester by the sea,” where the main character or characters have really normal lives like you and me, but something happens in their normal lives which turns into drama and tension, maybe a bit of chaos and lessons from the story’s character development the audience can learn from.
So, when you are involved in your writing or somehow creative endeavor, remember that drama must keep some kind of tension to grab the audience’s attention, and this at all times; whether little tension or beastly tension, and whether a roller coaster of tension, drama is all tension, the action which absorbs the attention of the viewer or reader.  And I repeat the word ‘tension’ because this is a MUST DO in any creative endeavor.  Also, remember that you can pick between the two crisis to make tension fit in your story and genre; this reasonable and wise choice will make your story stand out and create reality, even if it is a fantastical story–i.e., reality is about how well the details and the carrying out of the story is evoked in the mind of the viewer.
A great formula for explosive drama is this one:  When it comes to the situations or the plot of the story surrounding the protagonist–  As the protagonist in your story, for example, becomes less active and more passive, less certain of his inner strength and positive purposes, so it is the ambitions, the behaviors, the wickedness and intentions of those who surround him who now have another characterization in your story.  The common compromise here is when the protagonist appears undecided and emotionally deterred for the first three quarters of the piece or art, but then that same protagonist is forced into a definitive commitment in the final quart, a positive action.  The protagonist goes through all this hardships and struggles within himself so he can learn strength and wisdom to conclude in a positive note–for example, one of my favorites, as in Rocky, where he is a nobody and really feels like a nobody, but at the end gets inner strength and great love to finalize as a champion off the hard streets.
But more complex and hard to understand for the ‘Unsophisticated audience’ is the drama where the completely passive, undecided and purposeless protagonist does not have any major change of heart.  There is always danger of this kind of story not being too popular for the masses; but, on the other hand, there is a depth here that the avant-garde types or more ‘Sophisticated audience’ will admire as true artistic innovation, mostly because it manages to avoid the obvious and delves into the deeper, emotional issues of the human being, as in “The mirror” (1975 Russian film) or “The seventh seal” (1957 film)–i.e., these films, are more philosophical in nature and try to delve into the experience of being human, the beliefs, the judgments, the essence of the mental and emotional conflict these movies, as well as books since it is about all stories in any art form, invite a lot of questions; they do not sermonize nor belittle any specific demographic but instead, it just state different opinions and let’s the audience discuss its deeper meaning and the meaning they will take away for themselves.
So whatever is your drama type, always remember tension and adapt the action to your story. 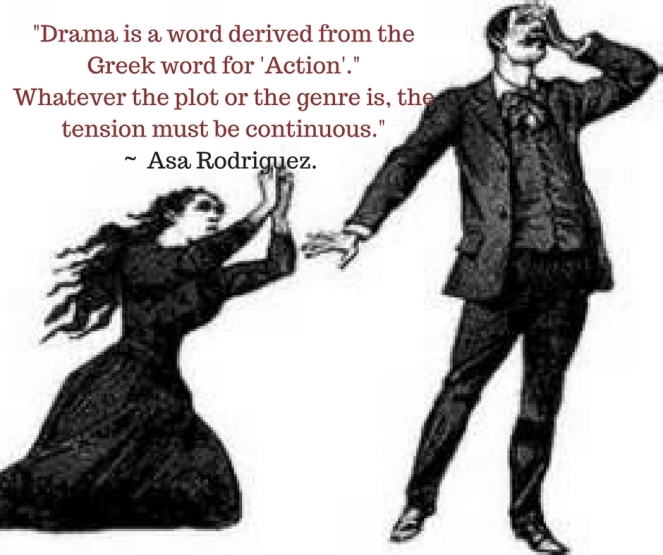 Several years ago, after I arrived to Houston, Tx., from Argentina, my dear father passed away and left a hole in me; however, his death made me understand many things about life and about myself. And slowly through trial and error, challenges and suffering, this made me access this spiritual awakening which augmented my intellect and emotional intelligence vastly as never before I knew. I soon started feeling more blissful every day without engaging in the outside pursuits which are popular by the blind world. And here I am now, to connect with people like me; people who values the truth behind all things, people who cherishes true mental freedom, and people who seek higher human elevation through genuine mental science. Are you one of these people...?? “Limitations live in our minds, but if we use our imaginations, our possibilities become limitless.” ~Jamie Paolinetti; writer and director. View all posts by thegodwithinblog