First, there was a boy; Peter was his name.  He loved taking photographs of nature; since child he had been fascinated with capturing moments in life on moving film or still camera, for him it was all about emotional depth and the deeper understanding of nature’s interactions with all sentient life.  Now, he would walk down parks in the whole state where he lived and take emotional photographs of the intimacy of nature itself.  Birds being fed by people sitting on benches, ducks on the pond, dogs being walked by their humans, squirrels eating and squeaking in their woodsy habitats, even a few bears photographed from secret hiding places up in the mountains; it all made him blissful and gave him true freedom, communion with himself.

Then, of course, there was a small Toy Poodle dog; his name was Beast.  Peter and Beast were the best of friends, the closest and most loving towards each other.  They were always together, and I mean always; Beast would go along Peter when he took his photographs in the park, in the woods, in the beautiful sandy beach, etc.  They had been best friends since Peter was nine and Beast had been less than one year old, when Peter rescued him from a sewer line–because some ignorant moron had not wanted the little dog and had left him there to die.

One day, like every morning, they had breakfast together.  Peter sat and ate his cereal in the kitchen, Beast sat near him and ate his little pieces of dog food.

Once they finished eating, they played a little.  But there is one thing I did not tell you yet:  They were both alone in the world, they only had each other, which was fine; but, however, sometimes they would feel a little lonely.  Peter had never met his family, and at about eight years old he had escaped from the orphanage in the depth of night.  Beast, well, if it weren’t for Peter he would be gone from this ephemeral life.

One day, they both decided to take a walk in the woods; and while playing a little in the way there, they saw something.  “Wow!–”  Peter exclaimed while Beast wagged his tail happily.

They contemplated Kate, a beautiful girl his age holding a camera as well; she was next to a few rocks and pushing her back against a tree, but she looked scared.  Peter did not understand why she looked like that, because a tree was blocking his view and he could only see her.  Someone was after her, causing her to be scared.

When he got near her, he saw the whole thing; the baby bear he had become friends with was terrorizing her.  Wait!–  To be honest, the friendly baby bear was only interested in the sandwich she kept in her pants pocket, so there was no terrorizing her really.  So, taking advantage of this friendship, Peter told his bear friend to leave her and to take his own lunch–it was Vegan food, much more nutritious and good for the growing bear.

So, long story short, Peter, Kate, and Beast were now best friends, best artistic buddies ever, sharing the same adventures and goals in life.  Peter and Kate fell in love, and then Beast got a little jealous.  But something wonderful happened next!

They were coming to the house that they shared together, the three of them now.  Peter and Kate had brought a companion for little Beast; the dog pound guy had been thrilled to have found a new home for this little sweet one.  Peter opened the bedroom door, and there she was with her tongue sticking out:

“SURPRISE!!” Peter and Kate yelled.  Princess was a small dog, too.  Beast looked confused, but then he stuck out his tongue in approval.  Immediately, they got along perfect, sniffed each other’s butts and played like soulmates.  In a way, they were falling in love.  And Beast was extremely happy, so was princess, to have met each other.

To end this story, Peter and Kate started both selling their pictures and working for the same magazine.  A couple of years later, they got married and were never separated.  Beast and Princess were together and had a couple of puppies. 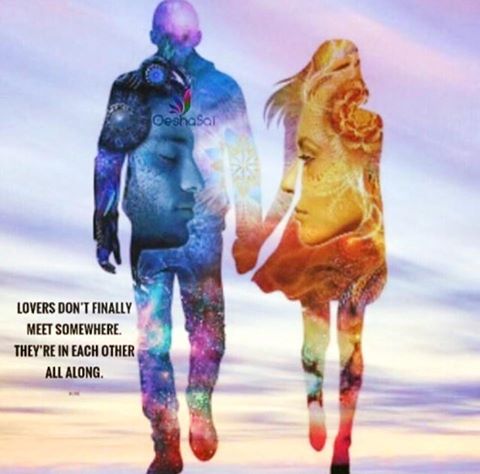 I am an author, philosopher, poet, book reviewer, fine-art painter, health expert, lover of life. Through my creative writing I seek inspiration and to inspire others. I know that all the love and happiness live already inside us, and if we can just silence our minds we might just connect more with our pure hearts. “Limitations live in our minds, but if we use our imaginations, our possibilities become limitless.” ~Jamie Paolinetti; writer and director. View all posts by thegodwithinblog